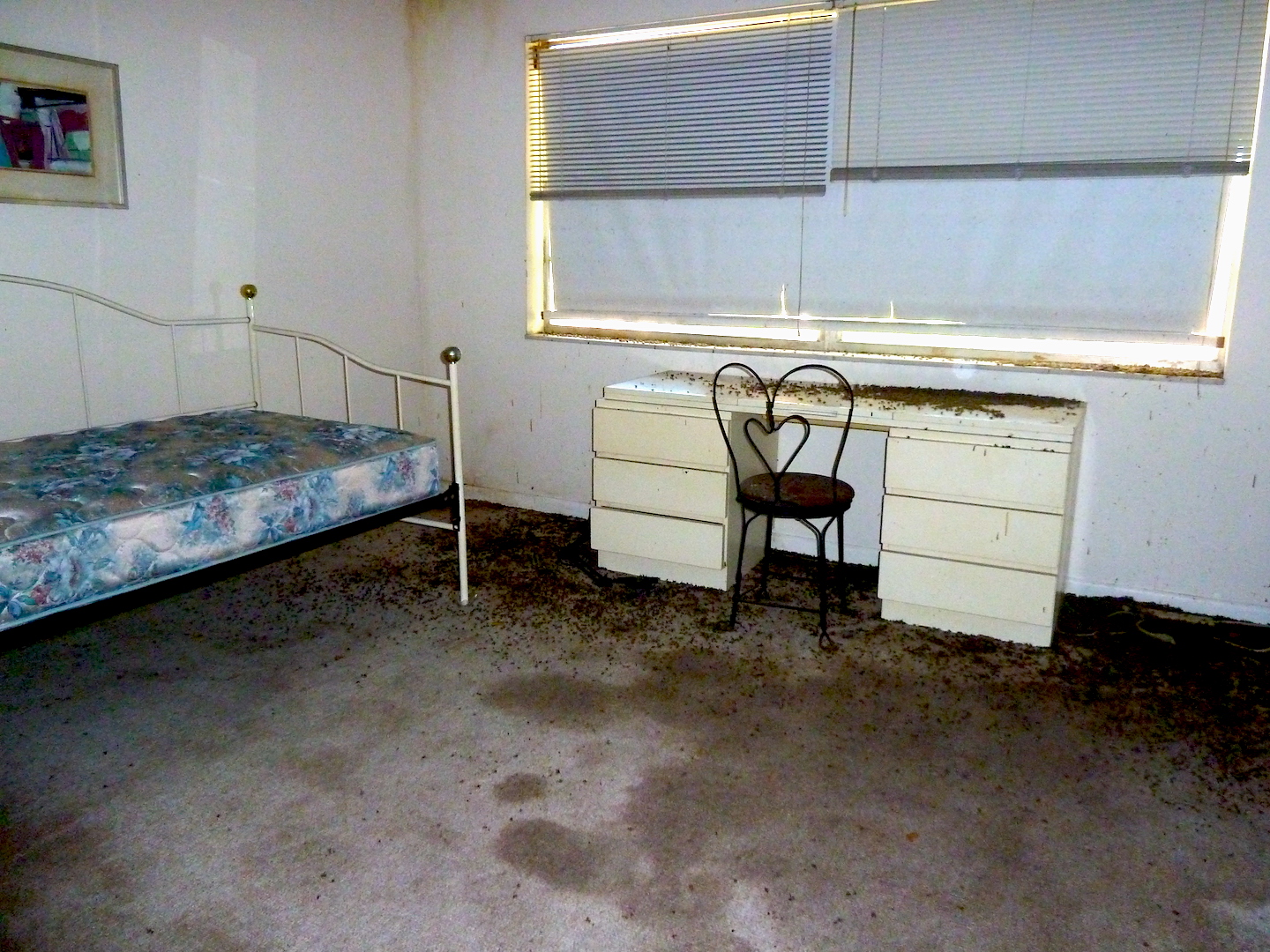 A sustained, monastic hum draws me to the top of the stairs. I look down to see the vaguely familiar, faded hand towel swaddled at the crease where the door meets the carpet, small tufts of dog hair gathered like black tumbleweed at its edges.

My ear to the door. The humming swells. I turn the handle but do not enter.

At dinner the night before, Pat H. informed us that my aunt had sprained her ankle in early December while walking Chelsea and had not driven or walked much since. She was bound to the ground floor of the house and had avoided the stairs to the second.

Standing in the open doorway of the guest room in a home I now own but had never once visited, I am awash of high school memories encrusted in the carcasses of bees. Thousands dead while the mother hive is still thriving with life. Rows of bent venetian blinds partially cover the wall of dirty windows. The daylight stains the room rather than illuminates it. The only furniture, pushed to the corner under the swarming brown infestation, is my white wrought iron day bed frame and vanity table, not seen by me for twenty years. The bed in which I lay awake staring at the patterned ceiling, willing the alarm to stay silent or school to be cancelled.

I will not call my mother up to this room, nor to the second floor of the house. It’s already enough, what we encountered downstairs. I hear her voice echoing out of the analog answering machine, “Cass? It’s Babs. It’s Friday. Are you there? Call me when you can.” She plays the tape over and over, imagining my aunt dead in her chair when the call originally came in. However, when I count the days, I realize my aunt ignored my mother’s Friday phone call. The medical examiner estimated her death occurred on Sunday.

I don’t need to correct my mother today. She is in shock more than grief. Her little sister, who kicked her out of this house at the very end of last century, had died alone of what we don’t yet know. Pat H. had brought her a bag of groceries on Thursday, but Carol made her pass them over the fence rather than enter the patio. Another friend had bought her booze on Friday – white wine, vodka, and brandy. When asked why, she said she was having a party.

The homicide detective surmised Carol was preparing the dog’s food when she went to sit in the rocking chair. Wrapped in the psychedelic afghan hand-knitted by grandmother twenty-five years earlier, my aunt expired. Her legs outstretched in front of her, her head tilted back. The Publix receipt from Pat H.s’ grocery run tucked into Angela’s Ashes as a bookmark.

It took Nestor three attempts to safely remove the beehive from under the eaves. Like a carbuncle bound to the hull of a sinking ship, the nest was fixed.