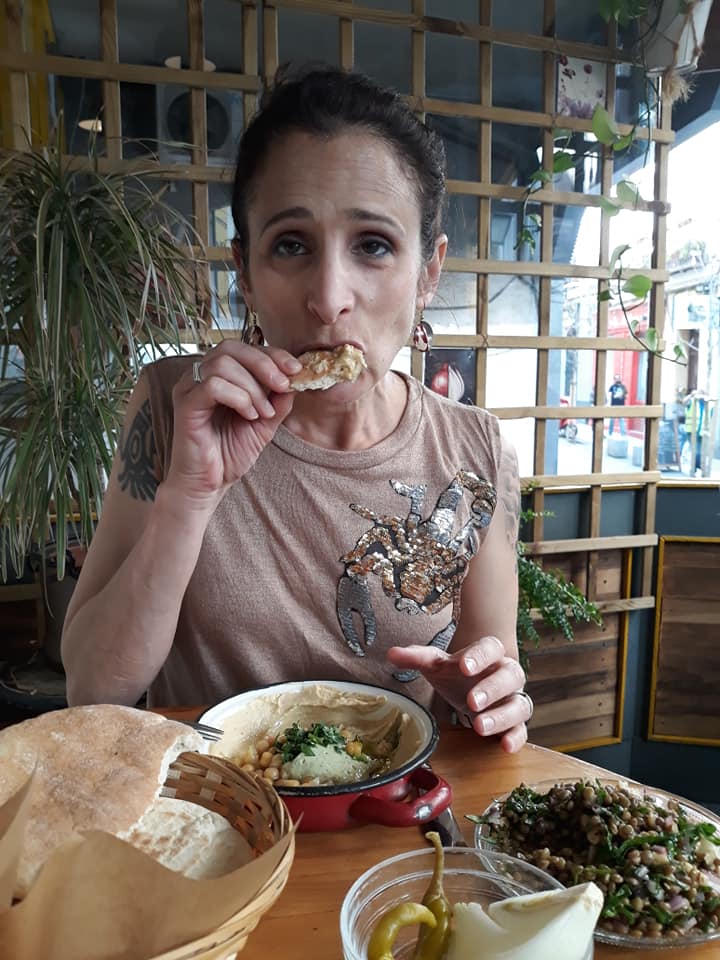 My trip to London had not been planned. I was in the middle of negotiating my first paid screenwriting gig in Los Angeles and was basically full of paranoia. I was no one pretending to be someone, an amateur and dreamer turned professional overnight. After writing a treatment for the film, I was paid a small sum and told that our deal was ‘in the works’. Even as a newbie, I knew that a too good to be true offer is more often than not exactly that. So why the trip to London when I should have stayed put to guard my new position? Because waiting makes me crazy. I’m jinxing everything by sitting by the phone. The opportunity to meet up with an old friend in London and perhaps pitch an adaption of a British writer’s short story to her agent gave me enough reason to book the cheapest flight I could find.

This all sounds very luxurious, I know. A quick flight to London due to impatience, but I really did go on the cheap. London was insanely expensive at the time. There was no Airbnb or Booking; only Craigslist, which is a resource I fondly miss using if only for its personal ads flavor. Through their services, I found a bed in a room in a house of wanderers in a non-descript neighborhood in the outskirts of the city. And, it was in my budget of £30/night.

Getting there was a challenge, but when I finally found it, I realized it was similar to the squat I lived in in East Berlin except that now I was paying. My new roommate (or I guess I was her new roommate) had an interesting job as a hostess at a restaurant called Dans Le Noir. In 2008, the “dark dining” chain had only been open for four years, and the London location was quite new. She explained to me that the concept was to mimic the experience of a blind person. The room is pitch black. You don’t see a menu or your server. You don’t see your food, your setting or your glass of wine, nor do you see anyone else in the dining room. And, they don’t see you.

My interest was piqued. I thought this might be my one and only chance to try something like that. Just the day before, I had observed a blind man ordering food in a restaurant. He had to rely completely on his waitress to choose his meal. He asked questions. She answered. He made a decision and trusted that it was the right one. This must have been in my mind when the woman sleeping in the other bed of my temporary bedroom offered to get me a table that night. As hostess, she could sneak me in on an otherwise booked night. The catch was that the fixed price for the 3-course wine paired meal was £100.

It does seem contradictory to go so far out of my way for the cheapest lodging only to spend more than three times that on one lonely dinner. When I was a junior at Western High School in Baltimore, my mom called me out for wearing Victoria’s Secret bras and underwear underneath my Value Village thrift store clothes. She was also the one with a 6-figure salary who would enjoy a BLT across from a homeless person that she invited to the local diner instead of dropping a few useless coins in his cup.

I took the offer of the reservation at Dans le Noir.

As a seeing person considering the concept, I imagined the menu to be a sentient experience of texture and flavor never to be dreamed of when eating in a normal restaurant. When you take presentation out of the equation, everything relies on the food itself. I thought it would be the sober version of an LSD trip, an explosion on the palette.

Figuring that no one in the dining room could see me enter, I didn’t put much thought into what I wore. In fact, I don’t remember it at all. It didn’t seem important. I arrived at the time of my reservation and was shown a locker where I put all of my belongings. My waiter and guide, Cyril, a blind man in his late 20’s, put my hand on his shoulder and led me to my table. As we passed through curtains into complete darkness, Cyril explained to me that there were no steps, something you don’t usually think to comment on unless walking down cobblestone streets with your 80-year old mother. It is, however, incredibly important information as a blind person.

It’s important to note that I ordered everything before entering. Cyril had explained that there were four menus – red (meat), green (vegetarian), blue (fish), and white (surprise!). I was vegetarian at the time, but I’ll eat anything in the dark. Another contradiction. I went for the white menu. I figured to really experience the unexpected, I should relinquish all control over the contents of my meal.

Once in the dining room, the sound of people chatting was of any normal restaurant. I was surprised that people would want to talk through such a unique experience. But that’s what many people do. Talk through experiences.

I sat down, and Cyril, with his gentle, deep voice, gave me a sense of placement in the room. He directed my hands to my silverware. He led me to the location of my wine and water glasses. Then, he left me. Alone. In the dark. In public. This is when the mind starts to play tricks. I really had no idea where I was in the room, how big it was, how many people were there or how to get out. If I suddenly panicked, I would only run into tables and fall to the floor and no one would see me to help. It demanded a sense of disassociation so that I could observe my feelings rather than react to them.

I’m in the dark listening to others socialize as if at a reunion or some sort of fabulous dinner party, and I start to realize what it must really be like to be blind. There’s no body language to read. No expressions or context. Only tones of voice and a feeling of being outside of it all. Thus, the true reason for being here is discovered and the brilliant concept of the restaurant (in addition to employing blind people, putting them in the power position, and donating a portion of proceeds to charity) is revealed. I knew I had done the right thing by giving myself this very private experience.

How peaceful it was to not have sight. Parts of my body relaxed in such a way I can’t explain. Little muscles in my face and behind my eyes let go. My brain slowed down, and all I could think was, “I wish I could write all of this.”

Cyril returned with my first course. I was feeling so euphoric – there was wine involved – that I expected the dish to awaken my taste buds and challenge my sense of all things food related.

This was supposed to be an amazing meal for the sheer concept of the restaurant. Not having to think about presentation totally lets the chef off the hook. It gives him or her the freedom to go for taste, texture and temperature only, abandoning the pretention of display. How could you screw that up?

In the dark, I finally understood the futility of forks. The great obstacle, breaking any connection I have with what I’m putting in my mouth. I found that a fork in the right hand served only as a shovel while the left bare hand navigated the food onto it after giving it a good feel for grizzle or extreme temperatures.

There was a birthday and they all sang happy birthday. No candles on the cake, so I called out “Make a wish!” At some point, I yelled “Speech!” Things I would never normally do. I’m like a heckler in the dark. a meat-eating heckler. I now understand old people in restaurants who chew with their mouths open and yell things without invitation, putting their unchewed pieces of meat in a pile on the corner of the plate. This was a good use of the one tool I had: the fork. I pushed all of the chewed inedibles to the side and imagined the look on the dishwasher’s face.

The main issue for me now was “what would a blind person do?” Does a blind person tell the chef that the dish he trusted the server to order is awful? I gently pulled Cyril aside and asked. He said that yes, he would tell his waiter if a meal wasn’t good. I asked how he knows what to order. He said he asks the waiter to tell him what’s on the menu, and he just has to trust the outcome. If it isn’t up to what he thinks it should be, he tells them.

It’s all about trust, he said, as it should be for everyone when putting their faith into strangers. My preconception had been, “I don’t want to be a burden. I’m already blind.” But then I thought, “What?” How shallow. Cyril agreed and brought the chef out to meet me.

It turns out this chef is hardly a chef at all. He had all sorts of excuses for why one of his four menus was terrible. This is when all of my years working in restaurants from back to front of house kicked in. I said, “It’s only eight dishes, and you don’t even have to think about presentation.” As he checked his phone under the table, breaking the darkness of the room, I realized this man has no idea of what the experience can offer, and he really didn’t care. I told him a bowl of rice prepared well is better than venison or alligator (dishes one and two) that I can’t chew. He said he was off to France in a week and was scrambling to find a sous chef and two prep cooks. I’ve heard it all before.

I chatted with Cyril after the “chef” returned to the kitchen. Cyril speaks with power and presence. In the dark, we had one of the most honest conversations I’ve ever had with a stranger in a restaurant.

Would I recommend Dans le Noir? Absolutely, for the overall effect of eliminating one of your senses in public and for the good cause. You must be open and take it as a complete experience rather than just a dining experience, but then I think we should approach everything that way, as open people entering a unique experience, and not yapping our way through it. To test myself, I’ve made a reservation at Dans le Noir in Madrid to see if the Spanish have a better time with the challenge of cooking in the light for people to eat in the dark.