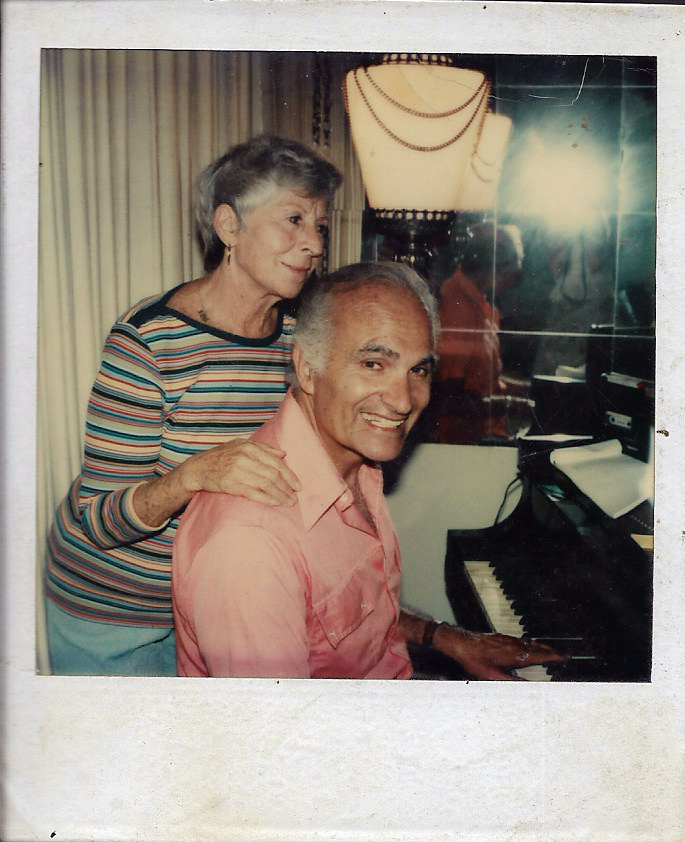 One day the Lord called.

His name was Leon, but in Miami everyone had a nickname. That’s what they called him by the pool, playing shuffleboard, around the card table. The Lord was my grandfather’s best friend and the one who nicknamed him “the professor” because he said that grandpa knew something about everything. Sitting on the sofa, watching the news on TV, the Professor nudged my arm in a “you see?” sort of way whenever one of his points was supported by news anchor fact.

My grandfather retired from the beautician profession somewhat early, and he and my grandmother moved to Miami, like all of their friends from Philadelphia. The whole gang was down there. My bi-annual visits were a combination of games in the pool, late-night episodes of Colombo, macaroni and cheese with fried smelts, and a daily “parading of the grandchild.” “My granddaughter,” they would announce to their friends who nodded in approval.

As a child, my last priority was to brush my hair. Between the salt of the ocean and the chlorine of the swimming pool, I managed some very distinct tangles. While the front of my hair seemed combed, because I did try to comb it, the back was growing in a hair pillow. Since my grandfather was a hairdresser in the thirties, forties, and fifties, coifing was understood, a given. Girls and boys wanted their hair to look slick, polished, coifed. The Professor often reminded us that he had styled Grace Kelly’s hair when she was a young teen in Philly. My presentation was “disgraceful for a hairdresser’s granddaughter,” and he would struggle a comb through my mop before the elevator hit the ground floor lobby. The gang sat on the randomly placed piano bench sized seats around the lobby feigning preoccupation in conversation. Each with one eye on the paraded grandchild, smiled with approval.

I was a pretty regular visitor there. My mother was often off traveling during the summer, and I stayed in Miami with the old folks, getting tan, playing gin and backgammon, drinking ginger ale, and learning old show tunes on the piano. As I got older, however, my visits became less frequent. I began to find it depressing watching their friends get old. My grandparents seemed ageless, swimming every day, taking walks. But they told me how people in their building would be found days later, death while sleeping. So I took of with friends for the summer on my own following in my mother’s footsteps: Europe.

The phone rang in the early morning. It was the Lord. He called to say there was something wrong with the Professor and that my mother better fly down. She and my stepfather left that week.

In Miami, she found her father dying from cancer: wasting away in the apartment. My grandmother, I was later told, was in a Xanax stupor and furious with doctors, bankers, men, and her dying husband. She walked around the apartment with an ash the length of a cigarette and a glass of cream Sherry, cursing lamps and glass ashtrays. Afraid to leave them alone, my mother arranged to have them brought up to us, I n Baltimore, so she could figure out the next step.

We watched his condition worsen, a process that I wish upon no one. He entered a hospice soon thereafter and was cared for by very gentle nurses while my grandmother on the other side of the door, cursed him for leaving her. He was weak, but he made it clear he didn’t want her in the room with him. I was with him everyday as he lost his ability to speak and eat, two activities that had given him immense pleasure. He mimed preparing meals and eating them because they were things he savored. He directed me around the room to look for stashes of money, which only existed in his imagination. I, of course, had the secret grandchild fantasy of finding some treasure. Doesn’t every grandparent have that pot of gold they save for their grandchildren? My grandfather had the reputation of being cheap or thrifty regardless of his generosity, because my grandmother painted him that way. I still had a flicker of hope.

He died six weeks later. And, it’s important to mention, he left enough money for my grandmother to live on comfortably.

It was my job to take my grandmother shoe shopping for the funeral. She had been living in Miami for over fifteen years and black shoes were not a part of her wardrobe. I took her to a mall, and after endless searching for the right price, I splurged $60 on an appropriate pair. “This is criminal!” she declared, “He wouldn’t have liked this at all.” Truth is, she was the real five-and-dimer.

I was reminded of the time that my mother and I gave my grandmother an expensive Lancôme make-up kit for her seventy-first birthday. She had always used cheap make-up on her sensitive eyes, and we thought it would be nice for her to have something better. My grandfather called us, full of insult, and demanded we take that vampish gift back. Later, I found out it was my grandmother who, as my mother puts it, “dropped poison into his ear.” It was she who was insulted.

My grandparents were the polyester king and queen. They had so many clothes, as many as any Hollywood star of their day. My grandmother had ten pairs of the same slip-on high heels because she could buy them on special. She knitted the most psychedelic Afghans because of the random colors of polyester yarn on sale at Penny’s. I’m not sure how my grandfather developed the affection for photorealistic print shirts, but he wore them well. Their closets were ideal for dress up, so glamorous and colorful. The polyester king and queen, bright colors of pink, peach, orange, and yellow, like the brilliant Miami sunset.

At the funeral, as my mother was giving the eulogy and sharing kind words about my grandfather and his generous heart, my grandmother perked for the first time in months to exclaim, “If he knew how much you paid for these shoes, he’d get up right now and return them!”

Oh, how we wish he would.